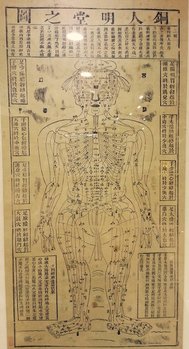 Early anatomical map of acupuncture points from the Ming Dynasty (1368-1644)
Acupuncture is a major modality of healing within the system of Chinese Medicine, with a clearly recorded history of over 2000 years . Its complete name comprises of two Chinese characters - ​'Zhen Jiu' 针灸, where 'Zhen' 针 denotes needling (acupuncture needle), and 'Jiu' 灸 denotes moxibustion. Therefore, acupuncture and moxibustion were intimately practised together in the course of Chinese Medicine history.

The modern notion of acupuncture practice involves the insertion of extremely fine filiform needles into targeted ‘acupuncture points’, which lie on selected meridian channels of the body, in order to create greater harmony within the body. This will then optimise the body’s natural healing capacity. While this description is indeed true, it only illustrates a partial picture of this deep healing modality without a contextualised understanding of the Chinese conceptual view of the human body. A brief explanation is offered here.

The modern term ‘acupuncture’ was first coined by the Dutch physician and botanist Dr Willem Ten Rhyne (1647-1700) who visited Nagasaki in Japan in the early 17th Century. His publication "Dissertatio de Arthritide: Mantissa Schematica: De Acupunctura: Et Orationes Tres"  is regarded as the earliest detailed record of Chinese and Japanese medicine written by a European. In it Rhyne uses the term  'acupunctura', which means 'to prick with a needle' - thus reflecting his focus on the clinical observations of the therapeutic techniques used by the Japanese doctors at the time. Hence an ‘acupuncture point’ in the Western notion, implies a linear coordinate on the body, an intersection of two lines at the junction of which is the appropriate location for the insertion of needles...

-- Lao Tzu (Dao De Jing, Chapter 25)
In contrast, the Chinese characters for ‘acupuncture point’ is termed ‘Xue Wei’ 穴位 which denotes an entirely different picture pointing to a very different conceptual view of the human body. The character ‘Xue’ 穴 literally means 'cave' or 'hole' - the top portion of the character denoting a roof, and the bottom portion denoting image of the opening to a cave. The character ‘Wei’ 位 means location. As such, acupuncture points are more accurately described as crevices along the body that act as portals of interaction between the internal body and the external world. This is aligned with the Daoist principle of Yin-Yang interrelationships, which view human beings sharing a dynamic interrelationship with the natural environment. With the heavens above and earth below, mankind is living amidst these forces subject to the natural law governing the cosmos, and therefore in his physiology, mirror these same laws as a micro-system. This explains why the language expressed in Chinese Medicine (and indeed many acupuncture point names), are very naturalistic - often named after, or likened to mountains, rivers and valleys. The ancient Chinese drew from their natural surroundings and derived conceptual principles that were then applied to man’s physiology, ultimately developing into the complex system of healing it is today. These principles include Yin-Yang , Five Movements, Qi flow and the Meridian system.

Hence, the body’s internal organs are also interconnected and is simultaneously vulnerable to influences from the external environment. As such, acupuncture has the potential for systemic effects, affecting the whole person, rather than just local to where the needles are inserted. This is why for example, needles in the foot may be used to treat back pain and may simultaneously be used to treat chronic systemic conditions. ​
To book an initial consultation or treatmnt session with Jane, please click here on the button below:
Book Online