What is Tai Chi &
Why Practise It?

Tai Chi or more formally, Tai Chi Chuan (太极拳) can be described as a form of mind-body exercise that is rooted in traditional Chinese philosophy, Chinese Medicine and martial arts. Therefore, it can be applied for improving health, as well as for self-defence. In our classes, we will focus on the practice of Tai Chi for improving or optimising our physical and mental health.

While there are many styles and forms of Tai Chi, it generally involves the integration of gentle and intentional movements with our breathing and cognition. Through focused relaxation, we can gradually improve our balance and coordination, mental calmness and concentration, as well as increase our self-awareness.

In our everyday lives, it can help us to grow in our physical and mental-emotional capacity, so that we may respond to the many stresses life brings instead of simply reacting to them.

About Jane
Your Tai Chi Instructor 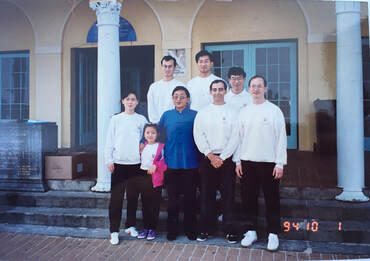 The art and science of Tai Chi runs deeply in Jane’s family. Her parents studied sports science, specialising in martial arts at the Beijing Sports University. After graduation, her father, Master Xie Shoude continued to study and specialise in the practice of Tai Chi Chuan. Since then, he has taught numerous students in Australia and worldwide for over 40 years.

Jane started learning under her father from 7 years of age. At that age, it seemed every kid had to learn some basic stances, stretches and forms as part of growing up. It wasn’t until much later in her late-teen years, when Jane began to develop a personal interest in the philosophical roots and applications of Tai Chi. She was inspired by the many instances when her father sat down over a meal or leisure time, and shared curious stories borrowed from the wisdom of various traditional Chinese philosophies such as Daoism, Confucianism and Zen Buddhism.

As Jane continued to practise and study with her father, he began to connect those 'philosophical stories' that so amused her childhood, to the practice of Tai chi. She started to realise there was certainly something more to these ‘slow-gentle-movements-that-only-older-people-seem-to-practice’ than meets the eye. She saw glimpses of the richness and depth of this art. Not only can it strengthen the body and sharpen the mind, it can also inform and transform the way we live our lives, bringing greater self-awareness, self-control and harmony to those around us regardless of the circumstances.

Jane has seen the fruits of this in her father’s life, and have also been personally moved by it in her own. May the journey you undertake with Tai Chi also move you and bear many good fruits for your health and in your life!
ENROL NOW